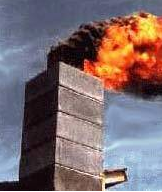 This is when the inside surface of the chimney flue pipe is actually on fire itself.

This is usually called a chimney fire. You might wonder what’s wrong with having a fire in the chimney. Aren’t they made for that?

Well, no. Fireplace chimneys are designed to have a fire in the firebox, not up in the flue. When a wood fire is burning in a fireplace chimney, the very top of the flame is somewhere around 650 to 700 degrees Fahrenheit (about 372 Celsius.). But as the gas and smoke go up the flue pipe, they cool down fairly rapidly to the 400 – 500 degree range (200 – 260 C.), depending on how far up the chimney.

Warm is good, melting hot is not.

The flue of a chimney is designed to hold up to about 2,000 degrees F (about 1200 C). However, chimney fires can get over 2200 degrees in a matter of moments. That’s hot enough to melt glass and even some types of steel. It can melt the mortar between the flue pipe sections and send a little volcano of burning material onto the roof.  If the fire goes on for any length of time, the chimney flue is not designed to handle it.

What do we mean by “handle it”?

The chimney may go through the chimney fire without cracking (or melting in the case of a fireplace insert metal chimney). But the chimney will most certainly be ruined for future use. Terra Cotta flue tiles inside a brick chimney can completely crack up. Yes the chimney will still take smoke out, but if you ever had a second chimney fire you could open up large cracks into the walls and woodwork.

The Cracked Up Chimney

One of my customers in Atlanta had a bad chimney fire before he started having it cleaned. He told me that the fire was shooting straight  up in the air like an upside down jet engine. After it went out, he went on his roof to check out the damage. He grabbed a brick and pulled on it…it came right off in his hand! The chimney had stood up to the fire, but every brick was loose and just sitting there no longer held together by the mortar. He had to have his chimney completely torn down and rebuilt from the ground up.

If you have a fire in chimney of a  fireplace insert type (a Pre-Fab or metal chimney), it de-tempers the metal of the flue pipe. So again, the chimney may hold up through the chimney fire, but it will be no good if you ever have another. Every manufacturer of metal chimneys recommends replacing the flue pipe after a fire in chimney no matter how minor or major the fire was. Because you can’t see how the molecular structure of the metal has changed, they always recommend replacement.

In both types of chimney, there are times when they don’t hold up to the pressure of a fire in chimney, resulting in partial or total burning of the home.

As you can see, it’s much better just to prevent a fire in chimney and get it cleaned regularly by an honest Atlanta chimney sweep.

Fire in chimney is to be avoided at all cost.

Fire in chimney is a disaster waiting to happen!