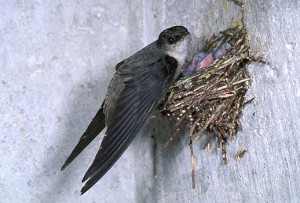 Chimney Swift is the name of the bird that nests in chimneys.  If you have them in your chimney, here’s what you need to know.

It is illegal under Federal law to remove them from the chimney. If they are already in there, you just have to wait for them to leave.

Chimney Swifts usually come in your chimney around April or May. They build their nest and lay their eggs around early June.  They will usually have 4-5 babies.

Once the babies hatch, that’s when you start hearing them. You don’t hear the adults, because they don’t sqawk. The squawking means the babies are hatched and begging for food.

The adults fly straight up and down the chimney. They go out during the day to collect food for the chicks.  When they come back down the chimney with food, the chicks go nuts, making all the racket.  It’s a strange sound if you don’t know what it is. I’ve had many customers think it was a snake hissing in their chimney!

Adult chimney swifts fly around your house all day eating insects, including lots of mosquitos!  They are actually wonderful guests to have.

The babies grow fast, and they are  ready to fly in late August usually. However, they must be strong enough to fly STRAIGHT UP before they can leave the nest. So they stay a little longer than your average bird.

After they are able to fly, they go in and out daily with the parents to eat their mosquitos. But they always come back at night to their (your) house.  Now, about mid-September, they are big enough for you to think about shutting them out.

You can have the chimney cleaned and a cap put on the top around now.  It must happen during the day. Starting at the bottom, we will make sure they are gone for the day. Then we clean the nest and droppings out, and last put a chimney cap on top. Why? Because, even though they migrate all the way to Central  America to spend their Winters, they will come back EVERY YEAR to the same chimney.

Chimney Swifts don’t do any harm to a chimney, but they do leave quite a pile of droppings which can be full of bacteria.  Their nest is made of twigs stuck together with a glue like saliva they secrete. The nest then sticks to the side of chimney. Quite a feat of engineering. The birds perch on the vertical sides of the chimney and even sleep that way.

And if they ever fly out into the room, you can just pick them up by wrapping your hand over them. They are totally docile and won’t try to hurt you at all. They are actually very cute.

There is one other really amazing thing they do.  Multiple familes will leave their own chimneys and move in together in one house. I call it the neighborhood clubhouse. I have seen 40 or 50 in one chimney. The video below shows a clubhouse chimney.

If you want to prevent Chimney Swift nests, then call us today to put a chimney cap on.